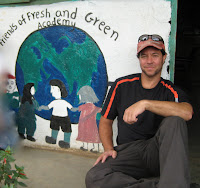 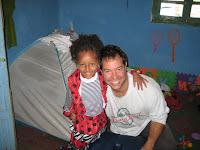 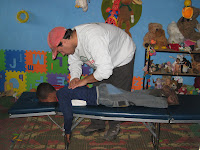 The Flight Attendant leaned over me as I sat in my first-class seat, and asked whether I'd prefer the shrimp scampi with risotto or the rack of lamb with mashed potatoes for dinner. The question was disconcerting, and it wasn't because I didn't know what I'd rather eat.

It was because, 12 hours earlier, I'd been in Ethiopia, one of the most poverty-stricken countries in the world, completing my second mission trip to its capital city Addis Ababa. Somehow, the menu choices didn't seem all that important anymore.

I'm truly one of the lucky ones. I live in the United States, have a home and office in New York City, enjoy three meals a day, have access to health care and food and water, and get to fly anywhere I want at a 90% discount because my wife works for the airlines.

But even more than all that, what makes me one of the lucky ones is that I'm a chiropractor and have been able to help thousands of people throughout my career. More recently, I've learned to give, serve and love out of my own abundance, as Dr. Sid Williams always taught us to do.

I've been a practicing chiropractor for just under 20 years and it's only been recently that -- thanks to some fellow chiropractors and most importantly, my wife Trish -- I've learned to actually follow Dr. Sid's advice.

My first lesson came shortly after the Sept. 11, 2001 terrorist attacks. Living in New York City, I felt the impact of "9-11" personally and professionally. Doctors from the New York Chiropractic Council set up volunteer stations and I joined them in the Javits Center adjusting rescue workers staying there. It gave me a bit of inner peace to know I was doing something for the people who came from all over the country to help our city.

Later, other volunteer opportunities presented themselves. I worked at a soup kitchen in Chelsea run by one of our Council doctors. The two of us worked side-by-side with a third DC and adjusted patient after patient after patient. By the end of the day, we had seen about 200 people who might otherwise never have had a chance to receive chiropractic care.

You get a totally different feeling about giving chiropractic in that situation. People don't have a "fee-for-service" mentality; they're not complaining about their bill or their insurance company or the lack of instant results. In fact, they don't complain at all. They simply thank you as you encourage them to keep getting their spine checked and keep coming back.

About two years ago, at the request of another flight attendant, my wife, Trish, volunteered to go to Ethiopia and help keep a school there from closing. She brought two 50-pound duffel bags full of shoes, clothes, powdered milk -- and some much-needed funds.

This school is special because, unlike regular public schools in Ethiopia, is has a free meal program for all pre-kindergarten through third grade students. Families in this area are so poor they can't always afford food, so children often skip school to beg on the streets for food or money. This school gave them an education AND a meal -- it was worth saving.

Trish returned from that trip on fire to make a difference in the world. As happens so often in life, the timing was providential. The woman who organized the volunteer trip could no longer continue her efforts on behalf of this school and Trish stepped forward to take over.

Shortly afterwards, we made our first trip together to Ethiopia, recruiting six volunteers from the airline. We planned to bring as much food, money and clothing as we could carry. After talking with a few DCs who'd gone on mission trips to the Dominican Republic and Cuba, I decided I'd bring a table and offer free chiropractic care as well.

The day after we arrived in Addis Ababa, we traveled to the school, distributed all the clothing and assessed the situation. We decided to open my "clinic" the next day.

The people at the school didn't know what to make of us. I was a doctor, but had no white coat, stethoscope, instruments, or even pills! Just an odd-looking table. Even the director of the school was unsure about what I did.

They did understand the concept of back pain, though, for they have plenty of it in Ethiopia. People are forced to carry water, food and supplies great distances to their homes (when they have money to buy anything). Walking two miles to fill an old, yellowed five-gallon oil jug with water and then carrying it back with an infant tied to your back can definitely cause a subluxation. I had my work cut out for me, and I loved every minute of it. My only regret was that I wasn't able to get them to fully understand the true meaning of chiropractic and why it's for more than back pain.

I returned to Ethiopia this August and this time, I worked with a translator to write a simple message explaining chiropractic: "Dr. Rubinstein is here from United States. He performs treatments without medications to help the intelligence/power inside you keep your body strong, healthy and resistant to disease."

People lined up and watched curiously, laughing at my attempts to give instructions in the native language of Amharic, and the sounds and reactions of the other patients. A few were hesitant at first, but when word got out, all the mothers of the school's students started to line up, along with the workers hired to improve the school, our driver and even the security guard.

Finally, the entire student body and lined up and I adjusted them all over the course of about three hours. Seeing the smiles on those 82 children, I knew why I had traveled 24 hours to give, serve and love. It truly was one of my best days in practice

I'm not going to lie and say there were no sad moments during the trip. But even in those moments, chiropractic can lift the spirit.

I recall the day we walked two miles from the school through some of the poorest conditions I had ever seen to a student's one-room home. His mother's HIV was progressing to a more symptomatic stage and she was unable to get out of bed. We brought food as well as money for rent and cooking fuel, in hopes that she could soon feel well enough to eat and thereby qualify for HIV medicine. (In Ethiopia, the government distributes HIV medication only to those who can prove they are able to eat.)

Before leaving the home, I did the one other thing I knew I could do for her. I helped her sit up, checked her spine and adjusted her. When we left, she smiled, thanked us and whispered "God bless you." She looked as if she had regained at least some hope.

Before I departed Ethiopia, I spoke with the director of the school to see what more we could do. She told me that if we gave her a few months' notice she could put the word out and have thousands of people come for adjustments. She said the government would probably be willing to provide a space for us to work and local radio stations, churches and schools could publicize the visit.

I know many DCs want to get involved but aren't sure how or where they can make a difference. Ethiopia is one place, but so is the soup kitchen in your city. You might choose to spend several days in Addis Ababa or an hour at the local homeless shelter. Whatever you do, you'll feel -- as I do -- like one of the lucky ones. For there are few gifts greater than helping someone who will never be able to pay you back.

(Dr. Gregg Rubinstein attended New York Chiropractic College and completed post-graduate studies in orthopedics and treatment of the low back including a lecture/study certificate program in advanced clinical radiographic studies. He runs a thriving practice in midtown Manhattan. If you have questions or are interested in helping on his next mission trip, contact him through his website 57thstreetchiropractor.com, or e-mail him at DrGregg225@aol.com.

Posted by Unknown at 3:49 PM No comments: